The US Markets Open Their Doors to the Cultivar Itrano Oil 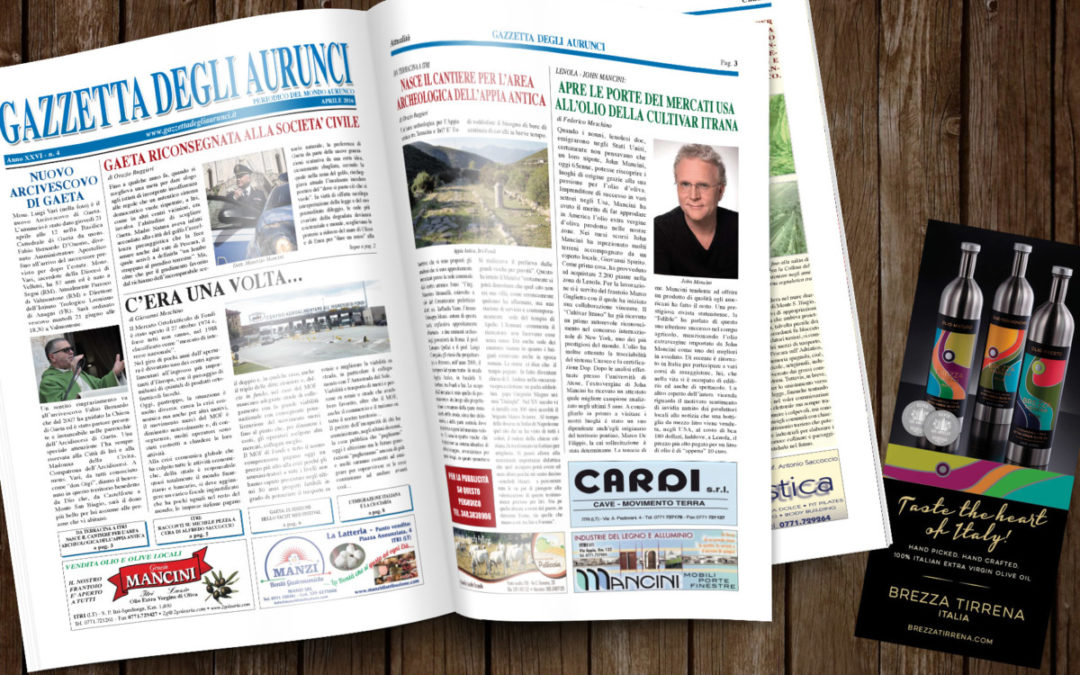 LENOLA, ITALY April 2016 – Italian newspaper, Gazette Degli Aurunci, recognized John Mancini’s passion for olive oil and the success of bringing Brezza Tirrena to the US market. The story can be viewed in Italian on the Gazette Deli Aurunci site.

The US Markets Open Their Doors to the Cultivar Itrano Oil

When the grandfathers, doc lenolese, emigrated to the United States, they surely did not think that one of their grandsons, John Mancini, a 65 year old today, could rediscover the places of origin thanks to this passion for olive oil. A successful entrepreneur in various fields in the USA, Mancini has had the merit of having the extra virgin olive oil produced in our areas arrive to America. In the last months John Mancini inspected many lands accompanied by a local expert, Giovanni Spirito: First, he took steps to purchase 2.200 plants in the area of Lenola. For the production, he made use of the Marco Guglietta olive oil mill with which he started a winning collaboration. The “Cultivar Itrano” has already received a first distinguished recognition in New York’s international competition, one of the most prestigious in the world. Furthermore, the oil obtained the traceability of the Unasco system and the Dop certification. After having carried out the analyses at the University of Athens, John Mancini’s extra virgin olive oil received a certificate as the best sample analyzed in the last 5 years. Advising him initially to visit our areas was one of his employees, also hailing from the Pontine territory, Marco De Filippis, whose soliciting was crucial.

Mr. Mancini’s tenacity tending to offer a quality product to the Americans has done the rest. A prestigious US magazine, “Edible” has discussed this ulterior success of his in the agrarian field, by mentioning the extra virgin olive oil imported by John Mancini as one of the absolute best. Recently he returned to Italy to participate in various tasting courses, he, who in his life worked in construction and even show business. Another aspect of the entire sequence of events concerns the justifiable envy from the local producers upon receiving the news that one half-liter bottle is sold, in the US, for a good 180 dollars, whereas, in Lenola, the highest price paid for a liter of oil is that of “barely” 10 Euros.